Chicago is a city that loves its hot dogs.

You are pretty much guaranteed to find a walk-in hot dog stand serving up a Chicago-style dog or Polish in every neighborhood of the city. Here are a few to check out on your next visit. 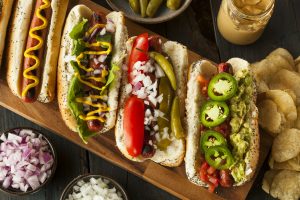 Founded in 1938 by a man named Dave, the original location on 12th and Homan was right in the middle of a popular Jewish neighborhood. That location changed owners in the 1970s when it was bought by Eugene Fountain, who then moved the restaurant to its current location on Roosevelt Road. Though a bit of the character of the building was lost in the move, the essence of the business was not. Now run by Eugene’s daughter, Gina, the menu has a few more items than the original did but the red hots are made as they always have been–with mustard, pickle, and peppers.

Jimmy Stefanovic arrived in Chicago in 1939 and his timing could not have been more perfect. His aunt owned and ran a hot dog stand on the Halstead and Maxwell at the time and had become too ill to operate it. She was contemplating closing the business permanently when Stefanovic bought the stand and brought to it his own flair. Over the years, he created the Polish sausage sandwich, the bone-in pork chop sandwich and a number of other items still popular on the menu today. The current incarnation of the hot dog stand is a sit-down joint near the University of Illinois at Chicago campus. The restaurant is now run by his grandson Jim who takes his role in the family business to heart. Though he no longer resides in Chicago, he makes frequent trips to ensure that the quality of their product lives up to its reputation.

In the late 1940s, Maurie Berman was studying to be an accountant. He and his new wife, Flaurie were looking for a way to pay his way through school and decided to open a summer only, drive-in hot dog stand at the corner of Milwaukee and Devon. The tiny spot sported goofy his-and-hers hot dog figurines on the roof (created by Maurie) and an original hot dog recipe that was unlike others being served at the time. Nearly 75 years later this “summer only” drive-in stand is still up and operating. Though he died in 2015, Berman’s daughter, her husband and Berman’s son continue to oversee operations.