A Trip In Time To Oak Alley Plantation 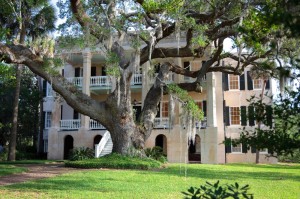 An historic plantation located on the mighty Mississippi river in the state of Louisiana, the Oak Alley Plantation is one of the most well known and recognized in the state today. Protected as a national historic landmark, it is named after its most distinct feature, the line of oaks planted hundreds of years ago. Running between the now historic plantation home and the Mississippi river itself, the massive oak canopy is just one of the many sights of interest of the attraction today. Also home to historic buildings, interpretive exhibits dating back to the Civil war, information on slaves and slavery in the area and other historic sights of interests including blacksmith shop, gardens, tombs and the like. Take a trip back in time and explore this top attraction for travel today.

Though the history may be somewhat scattered, it is a rich history that dates back to the early 1800’s back when the plantation was name the Bon Sejour or good living plantation. Established as a sugar cane plantation, its design was heavily influence by many of the more common cultures in the areas including Caribbean, French and Creole as well. Well known for one of its most well known slaves, a slave named Antoine, he is credited as being the creator of the paper shell pecan, a pecan with a shell so thin that it could be cracked with your hands.

Like most other plantations and people living in the area, the Civil War damaged not the plantation itself like some, but the economics. By the 1900’s, the plantation had already fallen into disrepair but in 1932, it was purchased and then donated to the Oak Alley Foundation restored and offered the plantation as a destination for travelers to see and explore this part of history. With guided tours and historic programming offered throughout the year, Oak Alley is one of the most popular attraction in the state today. Featured in movies, photo shoots, magazines and more, it is a great place to learn and explore the history of the state of Louisiana and the nation.

Just one of hundreds of historic sights protected by the National Park Service in Southeastern Louisiana, each offers a unique and interesting look into the history of the area, its people and the issues that those people had to cope with throughout history. Take time to learn more about the unique past of each place you visit and make the most of your journeys.

Explore top destinations and attractions worldwide with us. Get out and enjoy travel with Bill Bailey Travel Club.