You always hear that things are bigger in Texas.

It would seem that Kentucky likes to do things bigger and better than others as well. The state is known for its bluegrass and the Kentucky Derby, but it also has an impressive collection of “World’s Largest” items as well. Here are few that might be of interest.

When seeking interesting places to visit, it is hard not to pause for a moment when you see a headline that reads “world’s largest sassafras tree saved by a woman with a shotgun.” As the story goes, in 1957 the champion tree was threatened by the widening of a highway in Owensboro, Kentucky. When the bulldozers and construction crew arrived, they were met by home owner Grace Rash, who greeted them with her loaded shotgun. She held the crew at bay until a call was placed to the governor that resulted in the building of a retaining wall to protect the tree. Most sassafras trees grow to be around 40 feet tall, this one is roughly 100 feet tall and estimated to be 300 years old. Never underestimate what can be accomplished by a woman and a loaded shotgun. 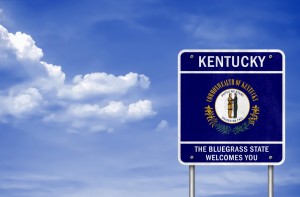 Mark your calendars for a garage sale paradise that occurs the weekend following the first Thursday in August each year. Originally the event was 450 miles long and billed as “the World’s Longest Outdoor Sale.” The sale started in Covington and followed Route 127 though the mountains of Tennessee, through Chattanooga and then to the Lookout Mountain Parkway. In 2015 the 127 sale was extended to Addison, Michigan and Gadsden, Alabama. It is now estimated that the four day event covers 690 miles. Information regarding the sale can be found online at www.127sale.com.

For a town that is famous for its baseball bats (hence the clarification in the title) this giant vampire bat is quite a sight to behold. The black silhouette stands out against the bright red brick exterior of Caulfield’s Novelty Factory and Supply Store. The factory, which started in Louisville over 80 years ago, is less than three blocks from the World’s Largest Baseball Bat so it makes for a quick side trip. The leather-like sculpture hangs over what appears to be an electrical conduit, making us wonder if the read beady eyes might have been designed to light up once upon a time.